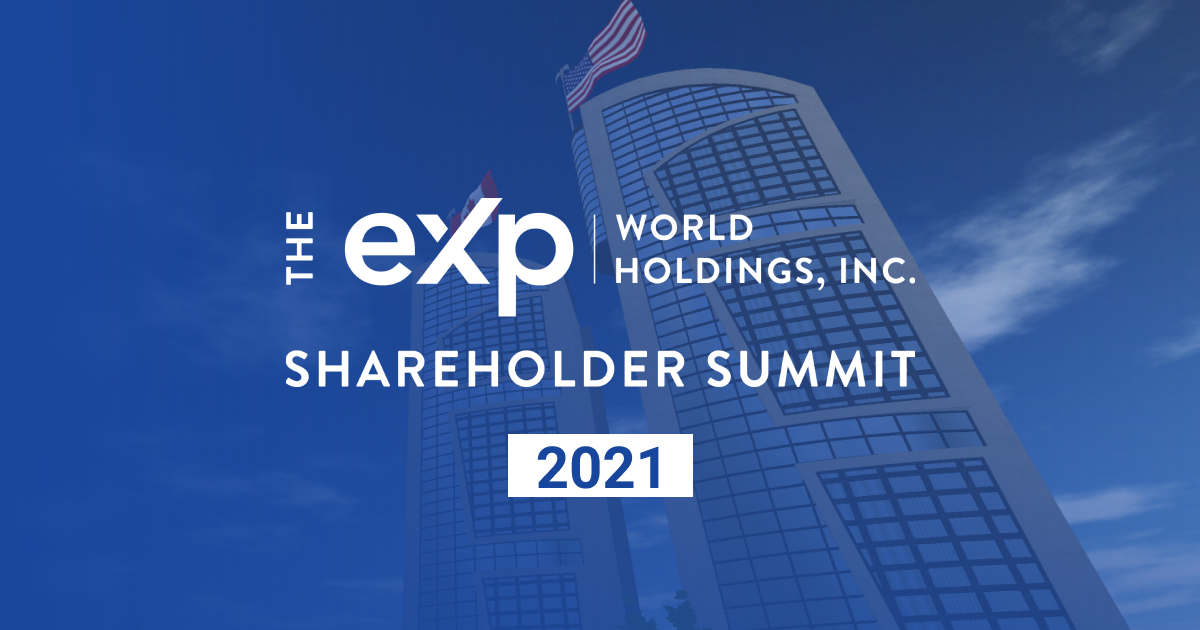 Incredible keynote speakers, 90 breakout sessions, an EXPO, a virtual live DJ set, and of course, the General Session in which eXp World Holdings leaders will provide a business recap of 2020 and what’s ahead, will all take place over three days in May during The eXp Shareholder Summit.  The event is free and open to shareholders, investors, media, and anyone interested in eXp.

Join this once-in-a-lifetime opportunity to hear from today’s top influencers, thought leaders, entrepreneurs & more! This year’s Shareholder Summit is one you won’t want to miss! In addition to general session, 90 breakouts, XCamp, Trivia Night, a global reception, and an EXPO hall — we’ll also have a live set by DJ Jazzy Jeff — all in the virtual EXPI Campus.

AS A REGISTERED ATTENDEE, YOU’LL HEAR FROM KEYNOTE SPEAKERS, INCLUDING: 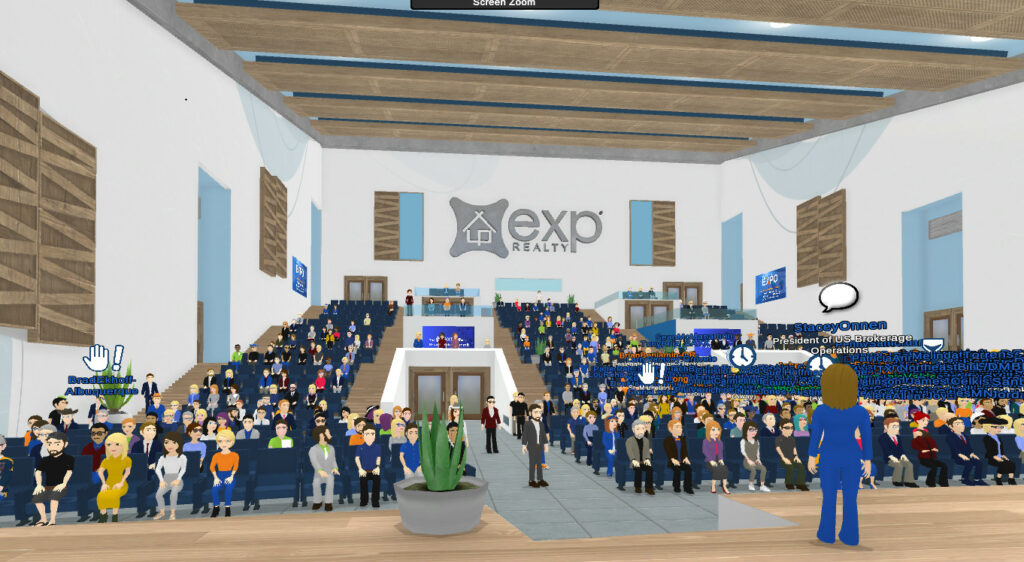 First Three Days Will Be Held in EXPI Campus

The first three days of the summit, Monday through Wednesday, May 17-19, will be held virtually in eXp’s newly created EXPI Campus. On Thursday and Friday, May 20-21, in-person, agent-led events will be held throughout the United States and internationally. Agents are encouraged to contact their state or designated managing broker to get insight into the in-state, in-person events.

General Session: The greatly anticipated General Session will kick off on Day 1 (8 a.m. PT / 11 a.m. ET) in which eXp leaders will take the stage to recap business and financial results from 2020 and help lay out what lies ahead in 2021 for eXp and its properties. Attendees will hear from:

Morning Keynote: Jason Dorsey. Many exciting keynotes are planned for the summit, including the Day 1 morning keynote by Jason Dorsey, president of The Center for Generational Kinetics and a pioneering Generation Z, millennial and generations keynote speaker and researcher. Dorsey spoke at last year’s EXPCON and offered fascinating insights into generational behaviors. His latest bestselling book “Zconomy: How Gen Z Will Change the Future of Business – and What to Do About It” was a No. 1 New Release on Amazon and Top 10 Business Book of 2020 on Forbes.

Midday Keynote: Grant Cardone. Monday’s second keynote will be given by the international speaker, entrepreneur, and author of “The 10X Rule,” Grant Cardone. He is the chief executive officer of Grant Cardone Enterprises and Cardone Capital and the creator of 21 bestselling business programs. Many know him as a star on Discovery Channel’s “Undercover Billionaire” reality show. He owns and operates seven privately held companies and a $12.53 billion portfolio of multifamily properties. Cardone was named the No. 1 Marketing Influencer to Watch by Forbes Magazine and he is also the founder of The 10X Movement and The 10X Growth Conference.

Afternoon Keynote: Swan Sit. Monday’s third keynote will be given by Swan Sit, who is one of Brand Innovator’s 40 under 40 and Marketing Women to Watch. She serves as Independent Board Director for two publicly traded companies and operating partners at AF Ventures and their newly launched SPAC (AFAQ). Swan Sit is the former Head of Digital at Nike, Revlon, and Estée Lauder and is the CMO of Ani Energy, a new energy drink company launched by TikTok stars Josh Richards and Bryce Hall.

EXPO Hall: In the afternoon, the EXPO Hall will be open for two hours. This is a chance to learn more about eXp’s sponsors, eXp Partners, ONE eXp, SUCCESS Enterprises, eXp Realty’s Agent Advisory Council, I Heart eXp and eXtend a Hand, and more!

Welcome Reception: After a packed first day of Shareholders, head over to the Speakeasy and dance to music by the fabulous DJ Jazzy Jeff. Dance styles include hip-hop, the twist, Gangnam style and much more. Yes – an avatar can do more than you know!

Global Reception: Tuesday will kick off with a reception to meet members of the eXp Global team, including representatives from more than 15 countries.

Morning Keynote: Brooke Baldwin and Jamie Kern Lima. Two remarkable and successful women will share the stage for the morning keynote. Brooke Baldwin, former CNN anchor and author, will interview Jamie Kern Lima. Lima is co-founder of IT Cosmetics, a company she started in her living room and sold to L’Oreal for $1.2 billion, becoming the first female CEO in L’Oréal’s 100-plus year history. She is on the Forbes Richest Self-Made Women list and is an active investor in more than 15 companies. Lima is the author of “Believe It: How to Go from Underestimated to Unstoppable.”

Baldwin is a Peabody Award finalist and author of “Huddle: How Women Unlock Their Collective Power,” set to release April 2021 with HarperCollins. She is also the creator and former host of CNN’s digital series “American Woman,” which focuses on the stories of trailblazing women. After 13 years at CNN, Baldwin left the network on April 16, 2021 to focus on amplifying the lives of extraordinary Americans and storytelling.

Included in the breakout sessions will be an Investor Q&A with eXp World Holdings Chief Financial Officer Jeff Whiteside and eXp Founder Glenn Sanford.  Also, members of the eXp World Holdings board of directors, including Dan Cahir, Gene Frederick,  Darren Jacklin, and Randall Miles, will share their thoughts about 2020 and the year ahead.

XCamp: Known as an “unconference,” XCamp is a chance to attend unstructured workshops with content provided by participants. Every session is spontaneous and unplanned.

Afternoon Keynote: John Salley. Pro basketball fans are familiar with John Salley, who is a 15-year NBA veteran and the first NBA player to win four championships with three different teams (Detroit Pistons, Chicago Bulls and L.A. Lakers). He leads his own production company and has hosted awards shows, as well as reunion shows of VH1’s “Basketball Wives.” He is involved with Operation Smile, PETA and the fight against diabetes. As a wellness advocate, one of Salley’s missions is to educate people on the benefits of a plant-based diet.

State Meetups: Agents and brokers will meet with their state broker teams for a fun social hour. Open to current and potential agents.

Morning Keynote: Rory Vaden. The final day’s morning keynote will be given by Rory Vaden, who is a world-leading expert in the psychology of ultra-performance. Vaden’s pioneering concept of multiplying time resulted in a TEDx talk with millions of views and has revolutionized the way that leaders think about time and make decisions. His first book “Take the Stairs” is a No. 1 Wall Street Journal, No. 1 USA Today, No. 2 New York Times and Amazon bestseller.

Fireside chat with Gina Bianchini: Courtney Chakarun, CMO of eXp World Holdings, will interview Gina Bianchini in a fireside chat. Gina is the Founder & CEO of Mighty Networks. Her mission at Mighty Networks is to usher in a new era of creative business built on community. Before Mighty Networks, she was CEO of Ning, which she co-founded with Marc Andreessen. Gina has been featured on the cover of Fortune and Fast Company and in Wired, Vanity Fair, Bloomberg, and The New York Times. She has appeared on Charlie Rose, CNBC, and CNN.

Afternoon keynote: Tim Storey. Tim is an acclaimed author, speaker and life coach known for inspiring and motivating people of all walks of life, from entertainment to executives, celebrities and athletes, to adults and children in the most deprived neighborhoods in the U.S. Tim has visited 75 countries and has spoken to millions of people.

ONE eXp Meetup: ONE eXp is eXp Realty’s diversity and inclusion initiative whose mission is to create the world’s most diverse and inclusive real estate brokerage where all views are respected and encouraged. Join us for a meet and greet with members of ONE eXp at the ONE eXp booth in the EXPO Hall. 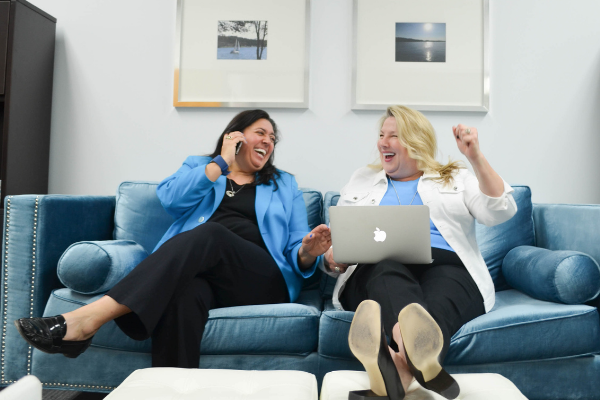 Want To Partner With Us?

We would love to chat with you about the benefits of working with us at eXp Realty. Real estate agents, team leaders, & brokers all over the world are increasing their business & building additional revenue streams with eXp Realty. Let's make this your best move yet! 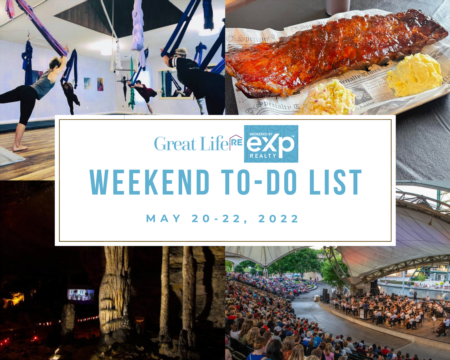 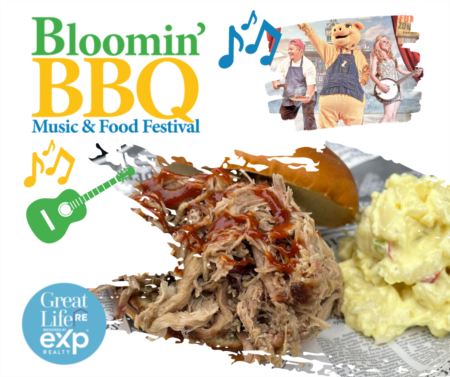